Celebrating 40 years of Gundam, Bandai collaborated with industrial designer Ken Okuyama to reinvent the classic RX-78. Designed as a machine first and model kit second, how does the HG Gundam G40 (Industrial Design Ver.) stack up to its HG predecessors? And does it look as cool as it does in its promotional anime clip? Contributor Marc Rivera weighs in.

Even at first glance, the G40 stands out. Sure—it has the standard Gundam color scheme, it’s skinny, and it’s got the classic Gundam head, from V-Fin to vulcan—but something about it looks… different. It’s smoother, it’s softer, and it looks almost human. Despite this, this mobile suit is still a menacing, powerful weapon: the symbol of hope for the Earth Federation, and the White Devil of Zeon’s forces.

This unique redesign of everyone’s favorite war machine has had many divided. Some consider the design to be ugly; an unnecessary departure from the tried and true design that’s lasted 40 years. Regardless of your opinion of the G40’s appearance, it’s impossible to deny that the model kit is amazing.

Comparison between the HGUC, G40, and HG Revive.

Like most Gundams, the G40 has the primary color essentials: blue chest, red torso and feet, white body with yellow accents everywhere else. One difference that might not be obvious is the lack of grey in the joints, which are all white. Thanks to well-executed part separation, almost all parts are color accurate, with an exception for small accents on the vulcans, verniers, and the tiny V on the front of the skirt. These should be yellow, but they’re white, so you’ll need to paint them if you want them to perfectly match the anime version. Only the V on the skirt has a sticker on the sheet. Overall, the sticker sheet is small: just foil decals for the little V and the sensors, with two colors for the eyes.

As for the design, it’s noticeably skinnier, closer to the proportions of the HG Gundam Revive than the HGUC Gundam. The body lacks the large number of panel lines found on most newer Gunpla, making the G40 look more like the original anime’s rendition which, according to the designers, was intentional. Along with the smooth body, the skirt is also meant to emulate the Gundam’s anime appearance. Rather than most modern depictions of mobile suits, which have skirt flaps that move when the leg moves forward, the original anime had a single static skirt, which the G40 matches.

Despite this adherence to the anime, there are some divergences from the original design. The head sensors, originally just small cameras on the top of the head on both sides, are now connected, with the sensor stretching over the top of the head. In the G40 animation, this is first depicted as a Zaku-like monoeye, but later scenes and the model show it as one pink strip. Beyond this, there are minor differences, like the backpack, which is similar to the Core Gundam’s, eschewing the beam saber holes at the top for some rotating pegs.

Overall, this design makes this Gunpla very distinct from its siblings, a redesign that is in some ways more accurate to its source than other HGs.

PROTIP: Apply the sticker before putting the head together to avoid any hassle.

As another version of the HG RX-78, this kit is fairly easy, with no big weapons or strange armor pieces that bump up difficulty. The only points of difficulty I found were painting details and applying stickers. Both of the foil head sensors are very thin, so apply with caution, and despite the manual’s instruction that you should apply the long pink sensor after putting the head together, it’s way easier to apply before both halves are put together.

Stickers aside, the kit is a unique build that’s easy enough for beginners but has enough to keep experienced builders engaged.

The G40 is definitely the most flexible!

As I mentioned earlier, the G40 was designed as a machine first and a model second, with a focus on replicating the movement and form of the RX-78 from the anime. Thanks to this shift in focus, this Gundam has the greatest articulation of any HG by far!

The arms have an almost full bend, stopping at a 15° angle. The wrists can swivel, allowing for more organic looking poses. In conjunction with the hands, which also bend at the wrist, the arms can recreate any pose a human arm can make, and some they can’t!

As for the legs, it’s much of the same: full bend at the knees, an ankle ball joint, and a foot that’s separated into three segments for smooth toe bends. For increased articulation in spite of the static skirt, the hips can swivel forwards and backwards and the legs can extend out, giving the G40 full range of motion, far exceeding previous renditions of the Gundam!

The extra parts are pretty much the same as for previous HG Gundams: a beam rifle, a shield, a set of open hands, a hand for holding the rifle, and two of the beam saber effect parts that are now common with HGs. The beam rifle is the most interesting of the bunch, with a targeting dish that moves to either side and a handle that accommodates for a wide range of two-handed poses.

The heavy shield causes the model to lean.

The shield is pretty standard, with a slightly different shape that’s more suited to bouncing bullets off of. Unfortunately, this shield isn’t paired well with the thinner arms and greater articulation. While the shield connects to the arm just fine, it’s a bit too heavy for the G40, causing the arm to sag and the whole torso to lean to one side.

While not an extra part, this model kit also comes with a fairly thick booklet where the designers of the G40 write about their work, showcasing some renders and sketches of the G40 and some previous designs.

The G40 Gundam, despite the departure in design from previous Gundams, captures the form of the titular suit of the original anime perfectly. Almost human in its articulation, the model is perfect for anyone interested in Gundam, model kits, or even just cool toys. If I had to think of one flaw, I would have to say that the increased articulation can make this kit look quite underwhelming just standing, so be sure to have a display stand ready for it!

Whether you want to recreate scenes from the anime, take pictures of it in silly poses, or just want a cool miniature mecha, the G40 satisfies, making it one of the greatest commemorations of the past 40 years of Gundam, and a peek into the future that awaits.

Marc first got into Gunpla with the HG Zaku II, which he thought had a really cool looking box. He knew nothing about Gundam back then, but since that kit, he’s gotten very familiar with the series. You can find him entering giveaways and posting pictures of model kits on Twitter @official_marc_r. 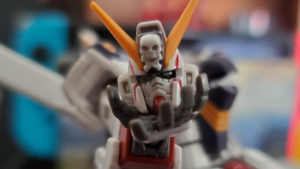