Did you check out Gundam Online Expo? Over the past few days, speakers like the legendary Gunpla builder Meijin Kawaguchi and Gundam mechanical designer Kunio Okawara shared their stuff with English-speaking fans. The best part is if you (like me) didn’t have the time to watch it live, you can check out the whole expo through recordings now.

Over the course of the expo, Bluefin announced a bunch of limited-edition Gunpla. I loved the silver sparkle Petitgguy and the Bluenicorn. If you want to check those out, head over to the Premium Bandai site, but here, as per usual, our pre-orders and new releases only cover widely available general releases, not special editions. Check them out below:

Justice Knight has leveled up! This bulkier version focuses on defense and support to reflect Kazami’s formerly teamwork-averse character growth. The shiny, dynamic beam effects for the thrusters are a nice touch.

This hulking Gundam frame is the protagonist mecha of the Mobile Suit Gundam Iron-Blooded Orphans Urdr-Hunt mobile game, which is not available in English. It has a gimmick I’ve never seen before: a “Crab Shield” that shoots out a needle into enemy armor.

Check out those flashy metallic icons, looking like something right out of Transformers! This is from yet another Japan-only Gundam franchise, the manga Gundam Build Diver Rize, a sidestory in the Build Divers universe starring a newly born EL-Diver named Rize. Definitely a weird-looking kit from a manga I will probably never read, but I love the asymmetry.

This armor can combine with and be used to upgrade the aforementioned Animarize. It comes with its own stand for display, or can be added to the main mecha as booster extensions.

Just like Tom Aznable described in his Deep Dive for episode 21, this Haro Fitter shares many attributes with the repair-type Karel from Celestial Being in Gundam 00. Its cute cat ears and seafoam color scheme make it clear that this is Parvis’ custom Haro Fitter. 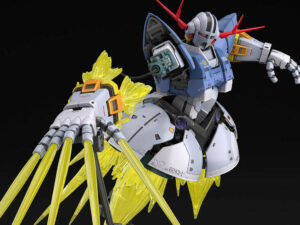